Alpha dog athletes don’t rely solely upon the tools of their trade to stake out their territory. A well-timed gesture or pointed comment can be just as corrosive to the confidence of rivals as any excellence in the arena. Roger Federer was a master of it, sometimes congratulating a victorious opponent for having played the match of his life (translation: you had to play the match of your life to beat me!). Tiger Woods is golf’s greatest practitioner of psych ops, so he’s unlikely to have missed Brooks Koepka’s exquisite mastery of the dark art at Bethpage Black.

Not that pre-tournament press conference, during which he declared majors easier to win than regular PGA Tour events. No, Koepka’s alpha doggedness was on display in subtle drone strikes targeting Woods himself. END_OF_DOCUMENT_TOKEN_TO_BE_REPLACED

It was a glistening, 420-horsepower Cadillac Escalade that ferried John Daly to the distant 10th tee at Bethpage Black Thursday afternoon, and a mud-spattered, 3.3 horsepower electric cart that he pointed down the fairway to begin his opening round in the 101st PGA Championship. His ride, like his career, a faded carbon of what it once was.

A man who quickly swaps vehicles deep in the Long Island woods might fall under suspicion of doing something illegal, but in the case of Daly it was merely something unsporting. And unsurprising.

END_OF_DOCUMENT_TOKEN_TO_BE_REPLACED

It was with the 7,277th stroke of his U.S. Open career that Phil Mickelson finally conceded he will never win the only major championship missing from his mantelpiece.

That was the stroke with which he intentionally hit a moving ball on the 13th hole of Saturday’s third round at Shinnecock Hills, a casual, contemptuous swipe that all but acknowledged the quest had finally broken him. 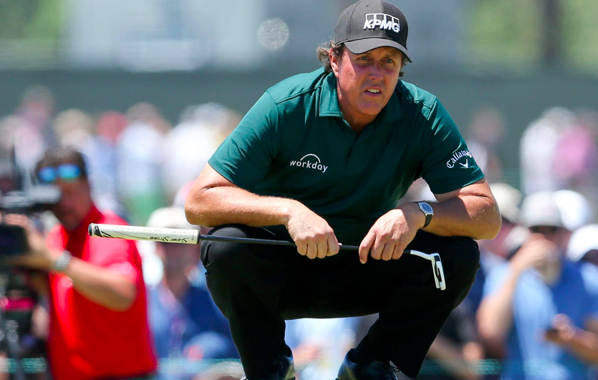 “I’ve had multiple times when I’ve wanted to do that, and I finally did,” he told Fox Sports’ Curtis Strange afterward, sounding for all the world like an entitled, petulant child who has just been busted for torching his parents house.

In that single stroke, Mickelson’s carefully constructed veneer fell away, the years of pained diplomacy and outward optimism with which he greeted every failed, painful tilt at the national Open. It was a quiet scream, seen but not heard.